Intentionally or not, humanity has been sending radio signals into space for many decades, although most of these signals are so weak that they could easily be confused with the background noise of space, even just a few light-years away. Furthermore, the entire Universe also generates radio signals much more powerful than those generated by us. So, how can we send a radio signal that cuts through the noise of the Universe?

Sónar’s interstellar radio message contains an introduction section, which we have simply entitled 'Hello', specifically designed to catch the attention of whoever may be listening. To understand its design we must first take into consideration that the vast majority of the 'sounds' of the cosmos are fairly continuous signals, with only slight variations in their amplitude or frequency. However there is an exception, stellar objects known as 'pulsars' generate radio pulses with an extremely constant cadence, as if they were interstellar beacons.

To avoid our transmission being confused with natural phenomena, we have designed a message that contains totally artificial elements that provide basic information about us. Specifically, in the introduction section of our message we have used two different radio frequencies to encode a numerical representation of prime numbers (numbers only divisible by themselves and by 1). In fact, our radio transmission is composed of small radio pulses, alternating between a fixed frequency and silence. We can imagine it as an intermittent light that when turned on is either green or red. The 'Hello' message begins with a single click in green and one in red (interspersed with an 'off'); followed by two green and two red; three green and three red; five green and five red, and so on. This process continues with the following prime numbers: 7, 11, 13, 17, 19, 23, 29... up to 137.

This alternation between frequencies (which would be our information 'bits') begins at a relatively slow rate (by terrestrial communication standards), with 16 milliseconds between consecutive pulses. Once we reach 137 'green' pulses (or '1') plus 137 'red' pulses (or '0'), the process starts again but at twice the cadence, counting from 1 to 193. No natural phenomenon is capable of generating such a signal thus ensuring it would distinguish itself to anyone listening, in addition to providing three concepts: 'bits', numbers and prime numbers. 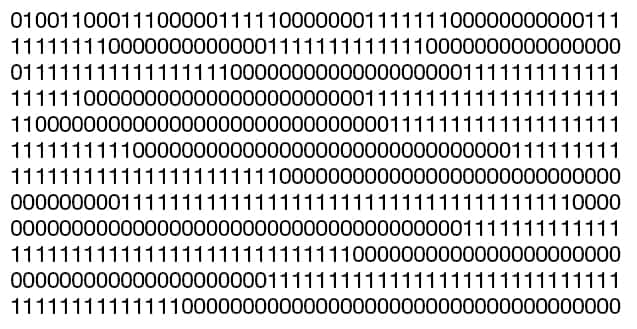